When staying in a villa vacation home on Aruba every tourist will go and visit the capital city of Oranjestad. Most people go to the capital city for the malls filled with boutiques, shops and casinos. Downtown Oranjestad and Seaport Village are the major shopping areas; however, Oranjestad also offers many other interesting sights and activities for everyone to enjoy.

The capital city of Aruba is named after the Dutch royal house of Oranje and has been the island’s capital since 1797. Aruba’s charming capital is best explored on foot- every street shows a little bit of Aruba’s Dutch history, from traditional architecture and hints of Spanish influence around every corner. Different historical buildings are currently under construction to make sure these parts of Aruban history will still exist in the future.

One very interesting building open for sightseeing in Oranjestad is the old military fortification, Fort Zoutman, and the accompanying museum located in this exquisite 18th-century building. Museo Arubano gives a very clear look into Aruba during the colonial periods and the pre- European era. The museum was established in 1983 right after the Aruban government completed the restoration of the Fort Zoutman building. This sightseeing opportunity is definitely worth taking for everyone who wants to know more about Aruban history.

Fort Zoutman is also the location for the Bon Bini Festival. This Aruban festival is specially set up for visitors of Aruba. During this festival, which takes place every Tuesday evening, there will be Arubans performing and dancing. This certainly is an activity that gives a good overview of the culture and history of this beautiful island in a fun way.

Next to the historical sightseeing Oranjestad also recently has its own tram line installed. The tram has officially operated since February 2013 and really is a plus for the city’s sightseeing and attractions list. When arriving to Aruba on a cruise boat it is not to be missed. The new tram begins at the cruise terminal and moves into town along the newly decorated main street which gives visitors a good idea of what Oranjestad has to offer. The tramline is mainly built to optimize the service for the tourists that come from the cruise boats. By using the tram they will enjoy the sights of Oranjestad in a very comfortable and exciting way.

The Aruban government also built the tramline to show that Aruba is getting greener. The tram is running on solar power, which means it is eco friendly and shows that Aruba is working on protecting the eco system. Furthermore, the tram will ease the traffic through the city since shoppers can now park outside of Oranjestad and use the tram to enter the shopping area.

The tram stops at six stations that all include historical monuments or museums. One of these stops is close to the Fort Zoutman tower. From now on, visiting Oranjestad will be easier and more fun since it is possible to combine the modern sightseeing’s with the historical sightseeing’s all together in one day. 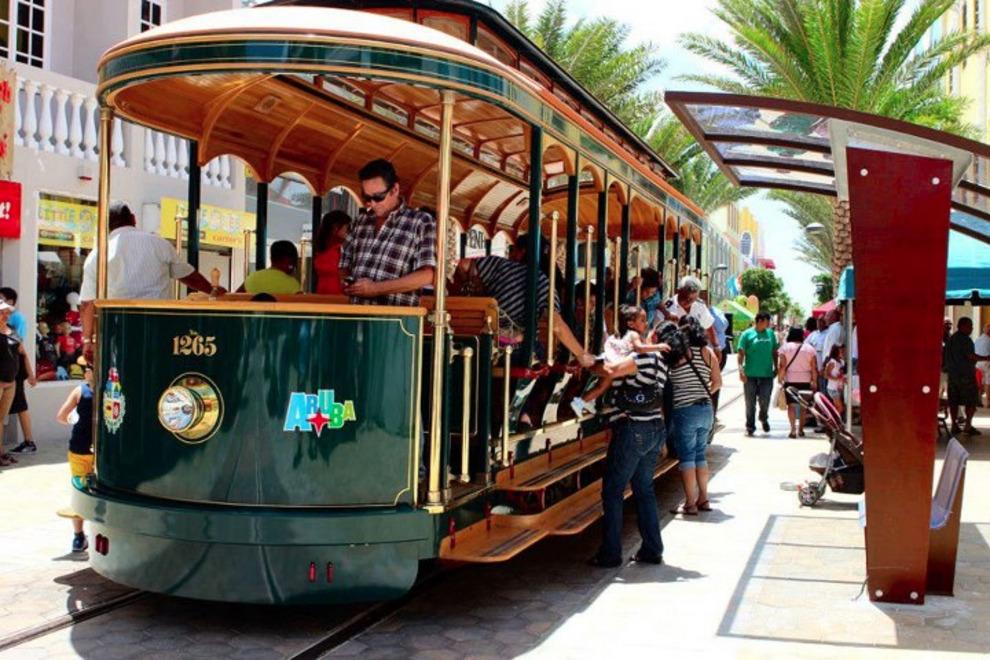